My husband and I recently played a round of Battlelore and had a great time. I say that because, while fairly close, I won. :)

Battlelore is a 2 player competitive game in which you are both trying to earn Victory Points. Depending on your scenarios, each of you earns VP in different ways whether it is buy occupying certain sections of the map (left, center, middle), occupying certain types of tiles (mountains, forest, hills) or a variety of other placements. There are also designated tiles on the map that allow you to claim VP. There are two armies to choose from, and usually we take turns picking which army we want to be. I’m not sure if I like the red or blue army better. I usually pick the red army simply because I think when my husband plays the red army he always wins :) 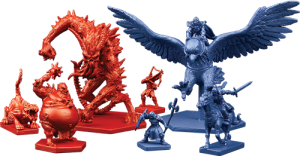 We both enjoy playing this game for different reasons. My husband figures out different strategies for setting up his army at the beginning based on what scenario card he’s using. I on the other hand like this game because the amount of strategizing is limited. One of my frustrations in board games my husband picks to play is how much strategy is involved. With desk building games I’m hopeless! Battlelore has random scenarios to choose from at the beginning of game play that tell you where the tiles are laid out on the map, and it gives you limited options for laying out your army. 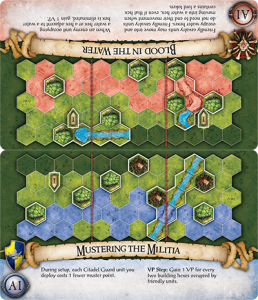 This is a great balance for the two of us. It allows him options to set up his own strategy (including which monsters and how many of each type to use for your army with a 50 point limit for your army and also giving plenty of options you can choose from for placing your army). At the same time it allows someone like me who doesn’t want to make too many strategic decisions limited options.It gives sample army builds I can pick from without doing the math to figure out how many of which monsters to use, and I only have to pick from the designated tiles for placing my army to start. I’ll be honest, I also like Battlelore because it is one I can win just as often as I lose. Most games we play my husband wins (again, my lack of strategy), but I’m a good sport and enjoy the game all the same so it’s all in fun for me. 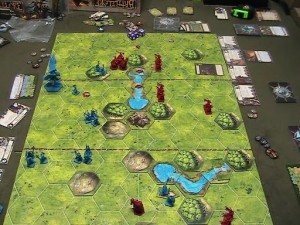