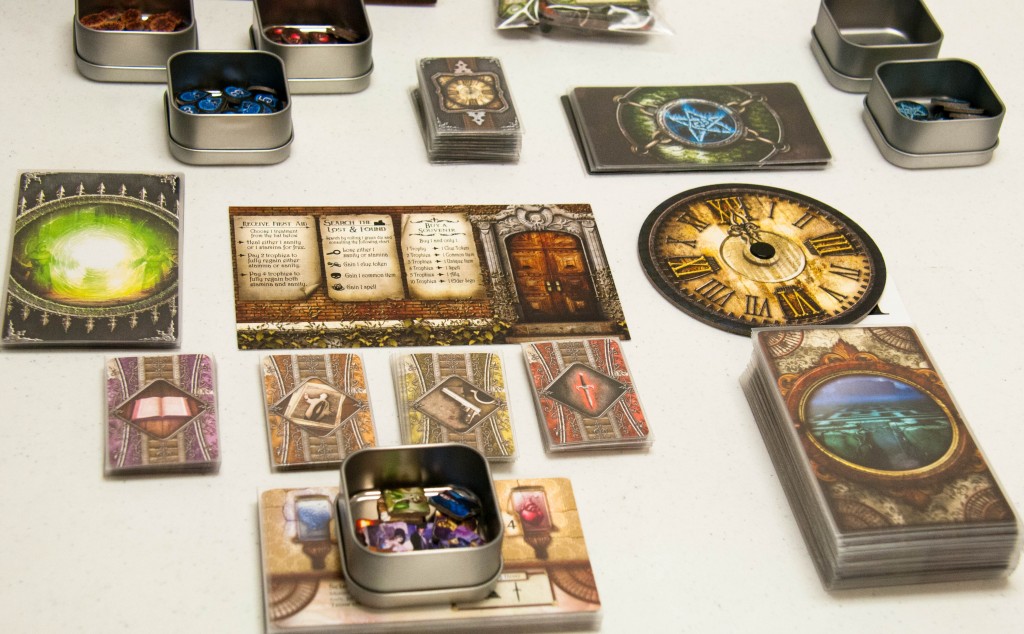 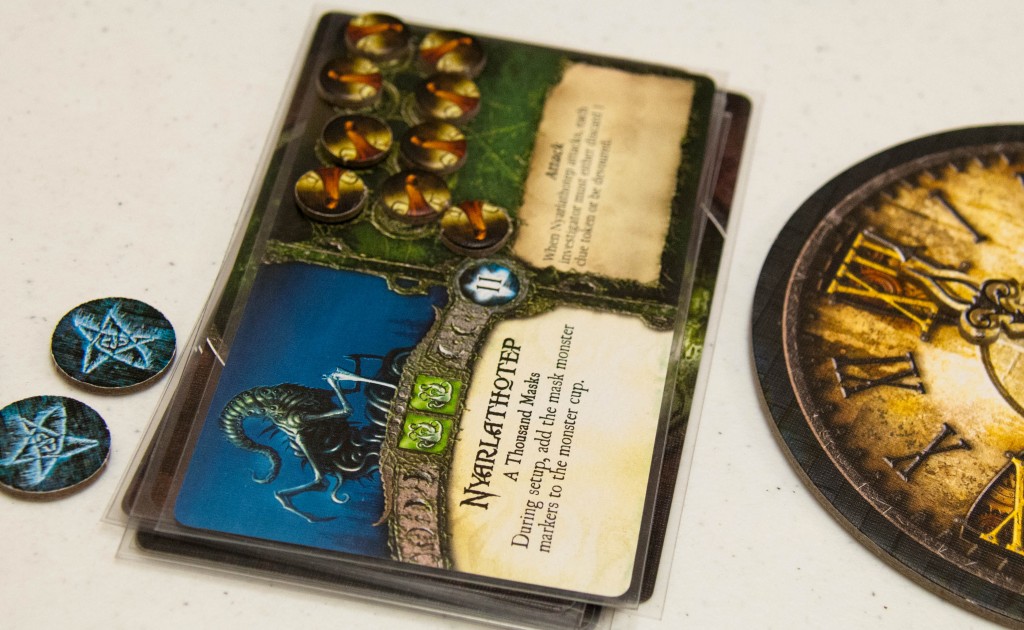 Ancient One – NYARLATHOTEP, A Thousand Masks

To begin with, our reviled Ancient One, NYARLTHOTEP required that we add all of the masked monster markers to the monster cup. The masked monster markers are nasty little heathens that sometimes lock your dice, usually don’t give you any trophy points, and always return to the monster cup, which means that they haven’t been defeated and may end up causing more havoc if drawn again.

Our investigators worked really well together! Our resident medical investigators, Carolyn Fern and Vincent Lee, were able to heal themselves, as well as fellow investigators, which allowed us all to take turns regaining one sanity or one stamina as needed. 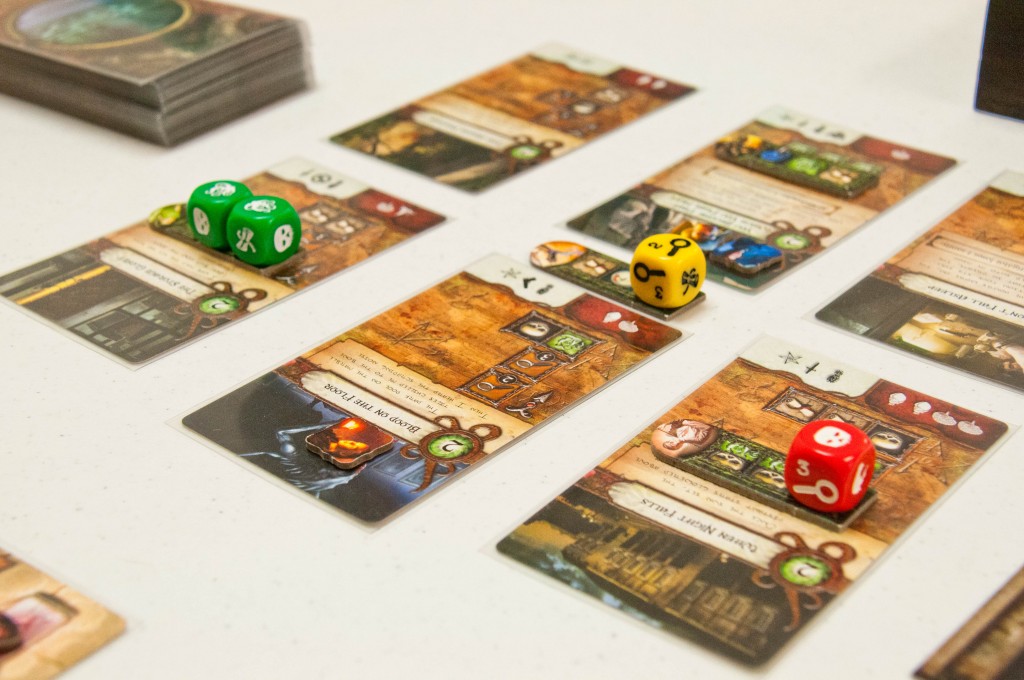 How many dice can we get locked in one game???

Sister Mary was able to ignore locked dice, which worked out nicely to combat the masked monsters, and gave her a full set of dice to roll on each of her turns. 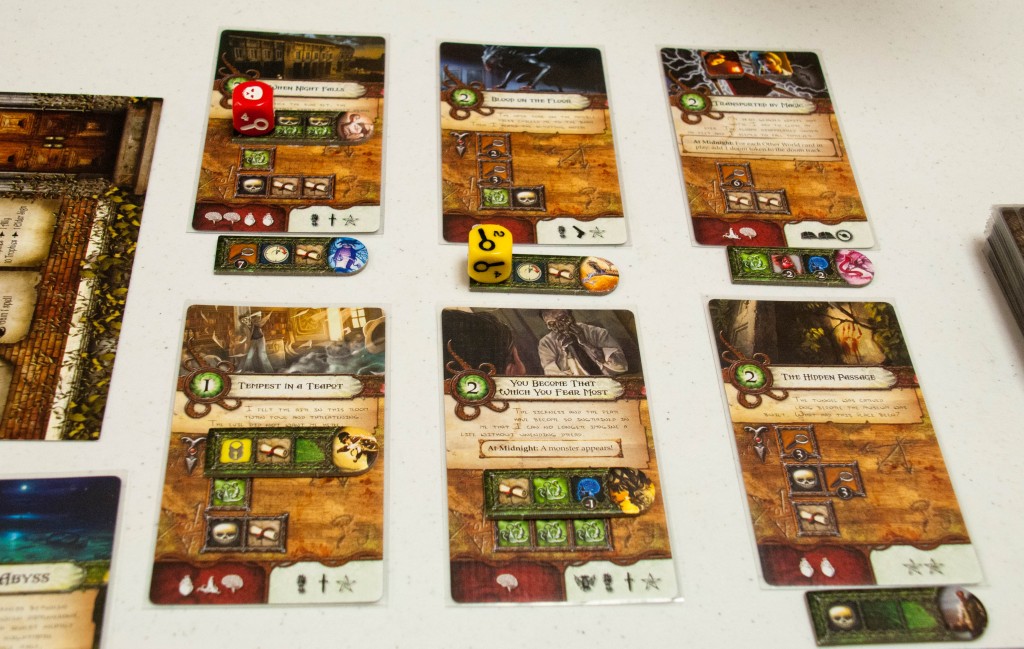 Still, the investigators fought valiantly, rolling way more skulls than necessary throughout the entire game,that we decided to nickname this particular game, “The Game of Skulls.” But in the end, we inevitably awakened NYARLTHOTEP… 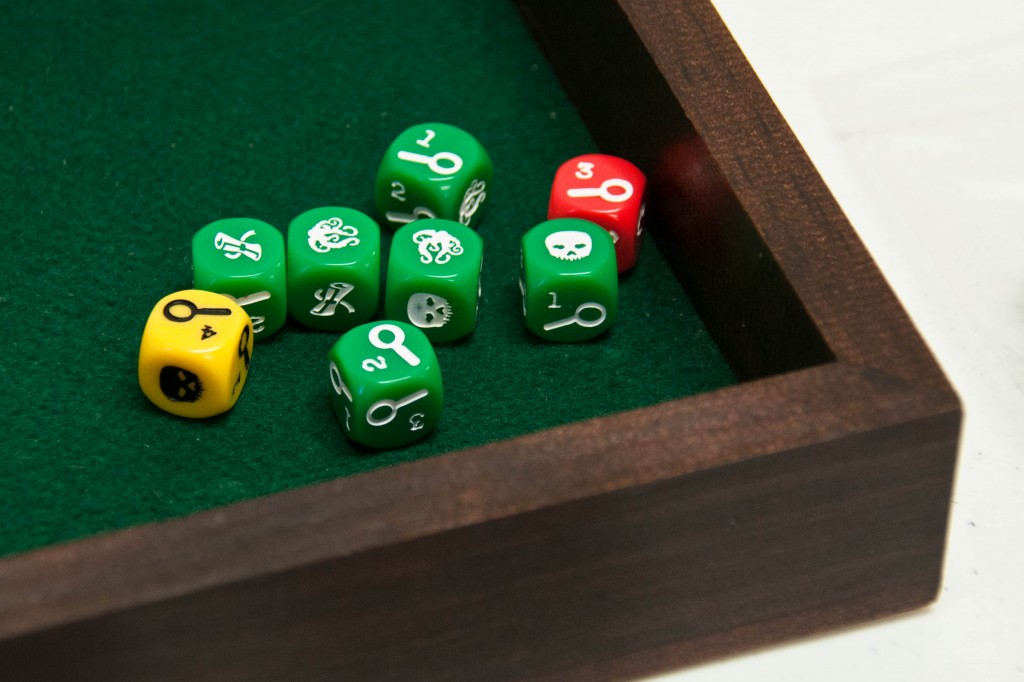 We were given one final chance to defeat him by attempting to roll double terrors, all the while losing clue tokens. If an investigator lost all of his/her clue tokens, then he/she would be devoured. Thankfully, no one ended up being eaten! After an intense round robin of rolling terrors, we removed ALL doom tokens (one at a time) from the doom track putting the Ancient One back to sleep and sealing him away! We WON! 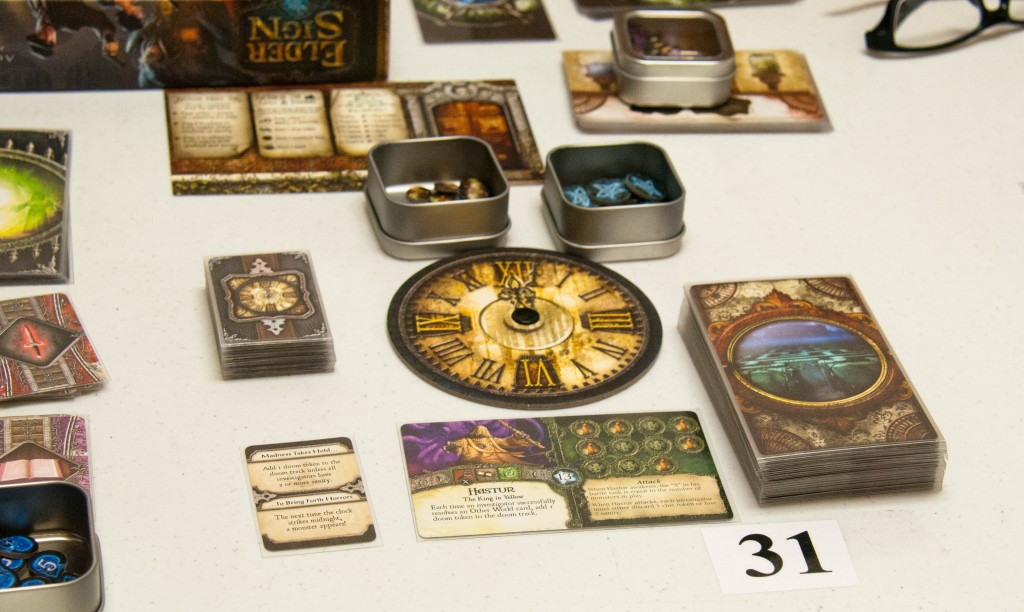 Ancient One – HASTUR, The King in Yellow

With the Ancient One, HASTUR, the investigators are punished for resolving Other World cards for the entirety of the game, adding one doom token to the doom track for each successful resolution of said cards. Unspoken pact for this game: avoid Other World cards if possible.

This group of investigators also worked pretty well together, though it was readily apparent that we didn’t have anyone in the group available to heal sanity or stamina, so it was necessary towards the end of the game to visit the first aid station for a few of the investigators. 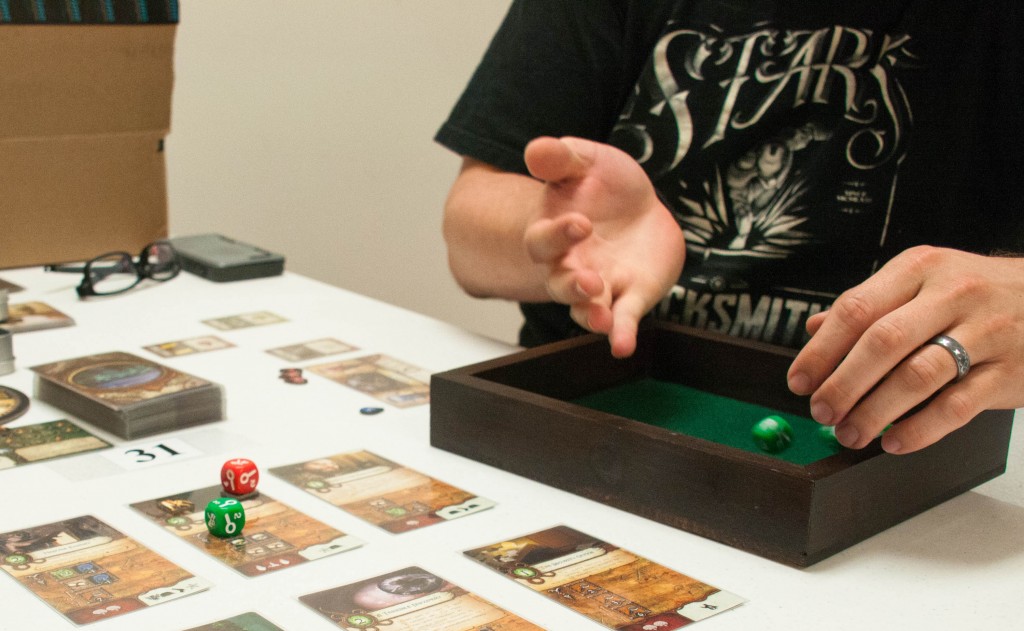 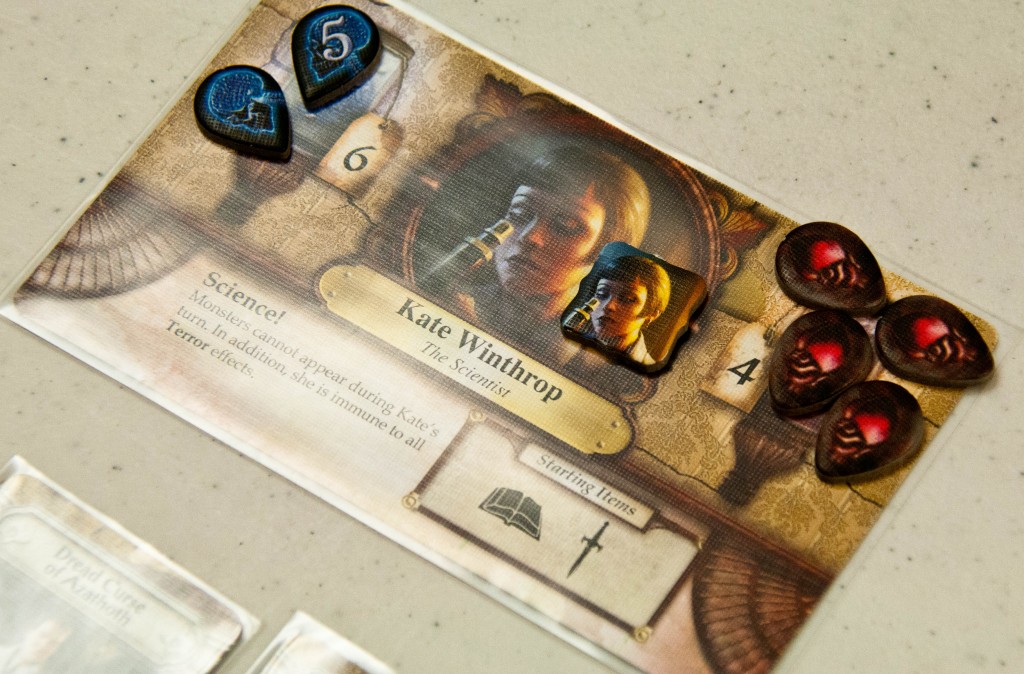 Kate Winthrop was also kicking monsters and taking names! This investigator is a group favorite, obviously, since she was played in BOTH games. Amanda Sharpe lent her ability to complete any number of tasks per roll instead of only one, which enabled her to resolve several adventures and defeat a couple of monsters. And, good old, Mandy Thompson was able to re-roll 2 dice before determining if the active player was successful in his/her task, which basically enabled some extra dice rolling, which helped saved the day on more than one occasion. 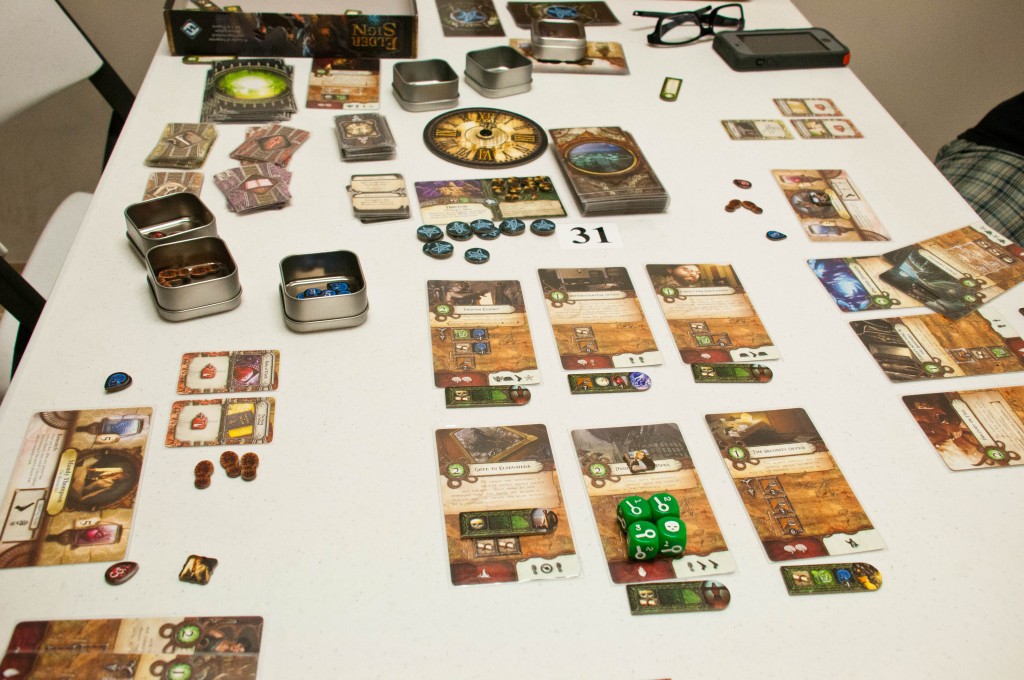 It was a race to the finish, as some of the investigators were preparing for the worst (visiting the first aid station and accumulating clue tokens when possible), they were only three doom tokens away from awakening HASTUR. As it turned out, however, the investigators had individually earned enough trophies from resolving adventures and defeating monsters, that they were able to purchase the final Elder Signs necessary to win the game! Take that, HASTUR!

We had a great time at Mana Vault teaching new and old friends how to play this fun, sit on the edge of your seat, bang your fists in desperation, exclaim when the monsters are defeated, and breathe a well deserved sigh of relief IF you win, board game, Elder Sign!