In the zombie-themed game, Last Night on Earth, a select group of heroes cooperatively work towards completing a very important objective (i.e. killing a certain number of zombies, finding gasoline, finding truck keys, defending a piece of property from the zombies, etc.) while the zombies work towards completing their own counterproductive objective (killing heroes, invading properties, thwarting plans of escape, etc.). All the while, the heroes are racing the clock and trying to finish up before sundown!

At our last Tabletop University event, at Mana Vault, a group of heroes epically battled a hoard of zombies…. TWICE!!! Here’s how it went down: 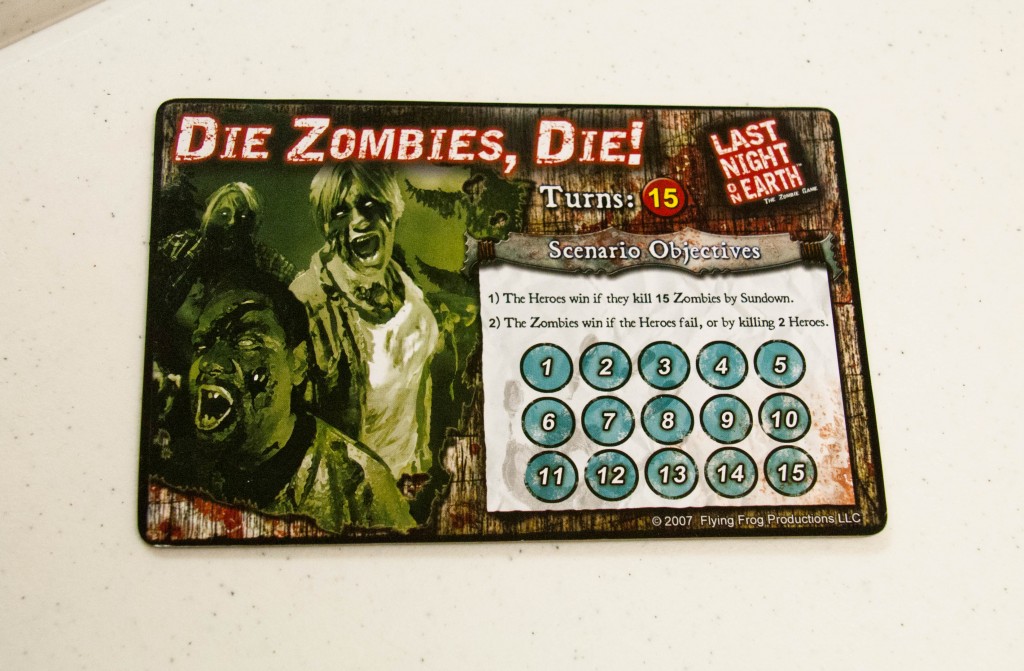 We started with the base recommended scenario, Die Zombies, Die! to let everyone get comfortable with the rules and mechanics of the game. Basically, the Heroes win if they kill 15 zombies by sundown. The Zombies win if the heroes fail OR by killing 2 heroes. 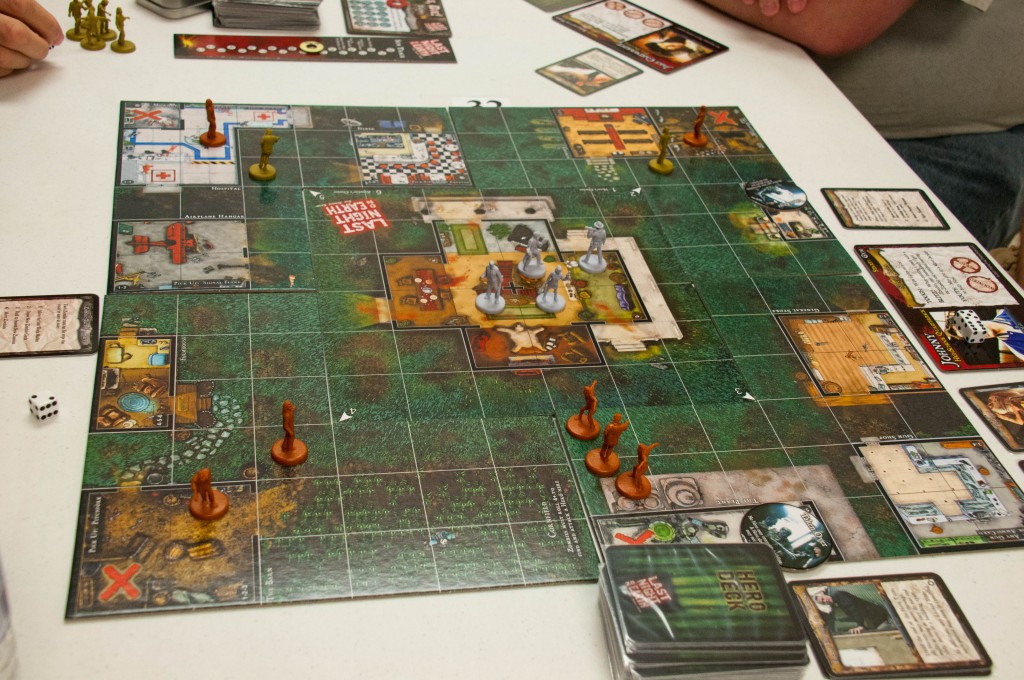 Three of our heroes immediately started out together in the center of the game board because their designated starting places were not randomly drawn for this game. Sheriff Anderson started out in the police station. The zombies got the first move, so they immediately started spawning and moving toward the center. The heroes kept themselves busy by searching the deck for weapons and beneficial event cards. The Sheriff eventually met up with the other heroes in the center and prepared to ward off the hoard. 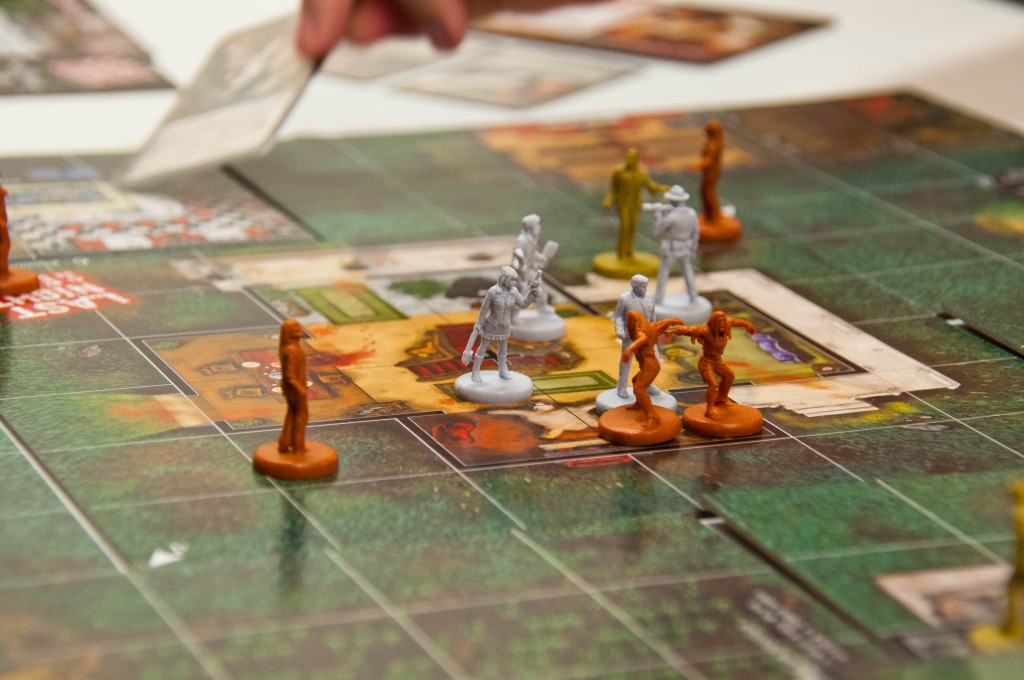 There were definitely some intense moments when the zombies inevitably reached our hideout. We had some weapons misfire and break on low dice rolls… thus preventing us from harming the zombies. 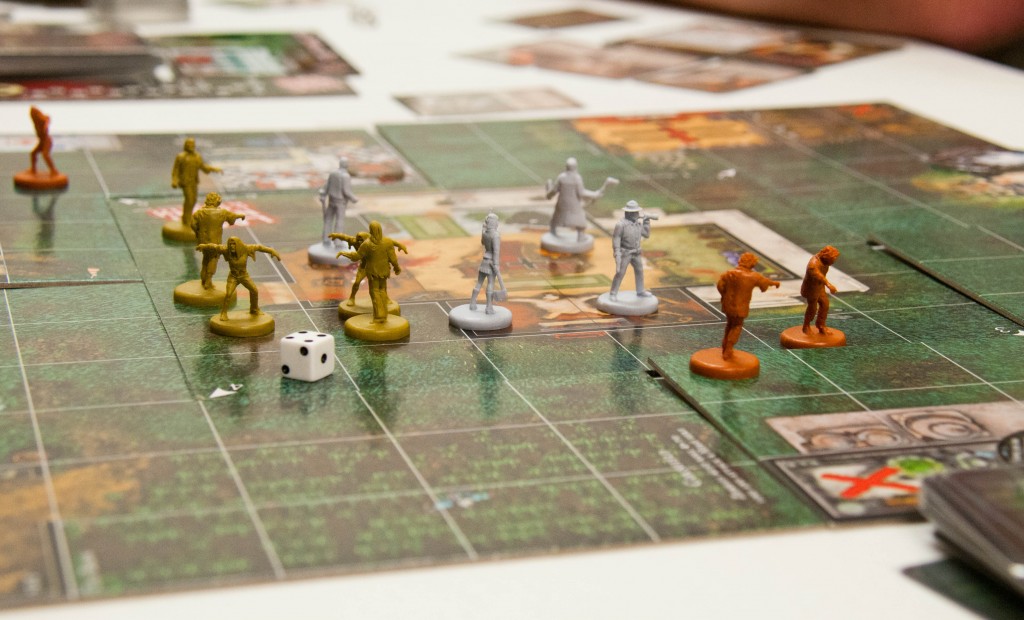 There were some times when it looked like the hoard might invade and kill us all… But new player, Will, was continually optimistic, with a smile on his face and two thumbs up, saying that everything was going to be just fine! While, Jason quoted his hero’s card, “I ain’t goin’ out like a chump!” 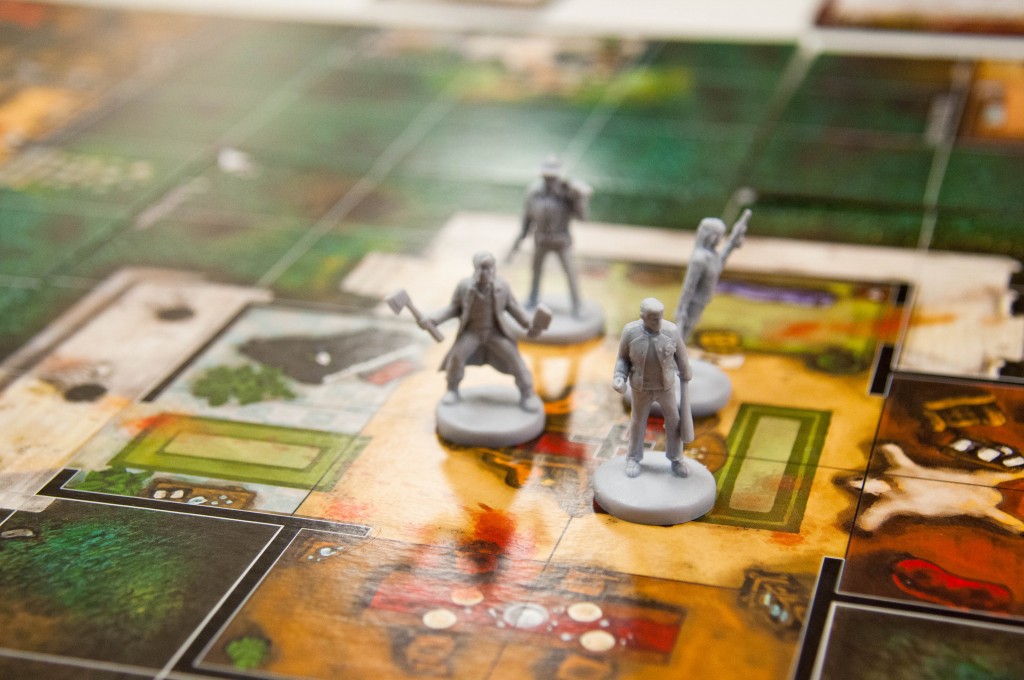 The heroes all stuck together, each guarding a corner of the house, allowing the zombies to come straight to them. This worked out nicely because, with team work, they were able to watch each other’s backs, exchange items, and slaughter enough zombies each turn that they quickly accumulated the required 15 zombie deaths well before sundown AND without a single wound to any of the heroes. Congrats to the Heroes!!!

Round Two left us all a little worse for the wear… In the scenario, Escape in the Truck, the Heroes had to find gasoline and the keys, fill up the gas tank, and have at least two survivors in the truck before starting it and making an escape. The zombies were out to disrupt our plans of escape by any means possible. 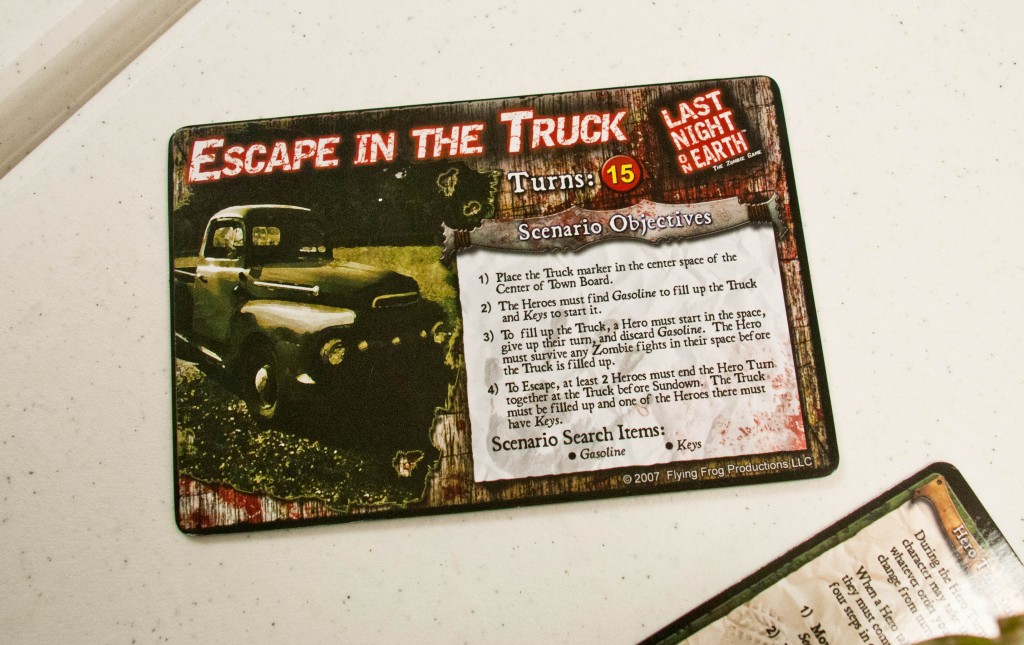 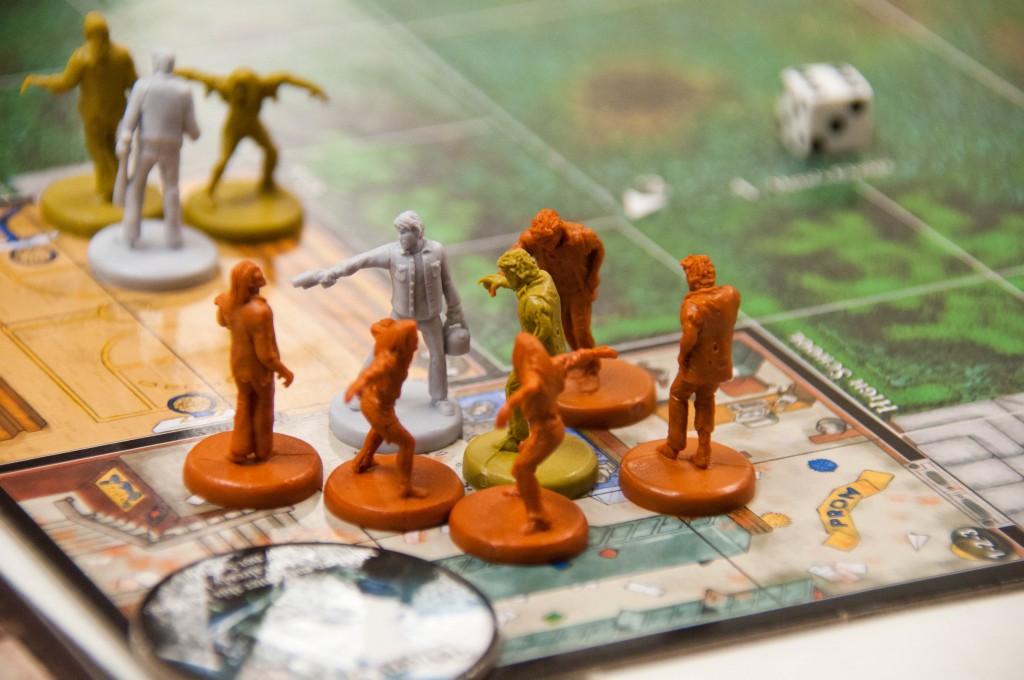 Right off the bat, the zombies pulled out some advantageous event cards and placed a “Take Over” token on the high school, which allowed them to swarm that location with one zombie per space available. This meant ultimate and untimely disaster for Billy, the Sheriff’s Son, who happened to start out the game in the high school…. He fought valiantly and lasted longer than anyone expected by out-rolling the zombies and fending off their attacks, but he ended up sacrificing himself. Johnny, on the other hand, escaped the high school gym and headed out to retrieve gasoline successfully. 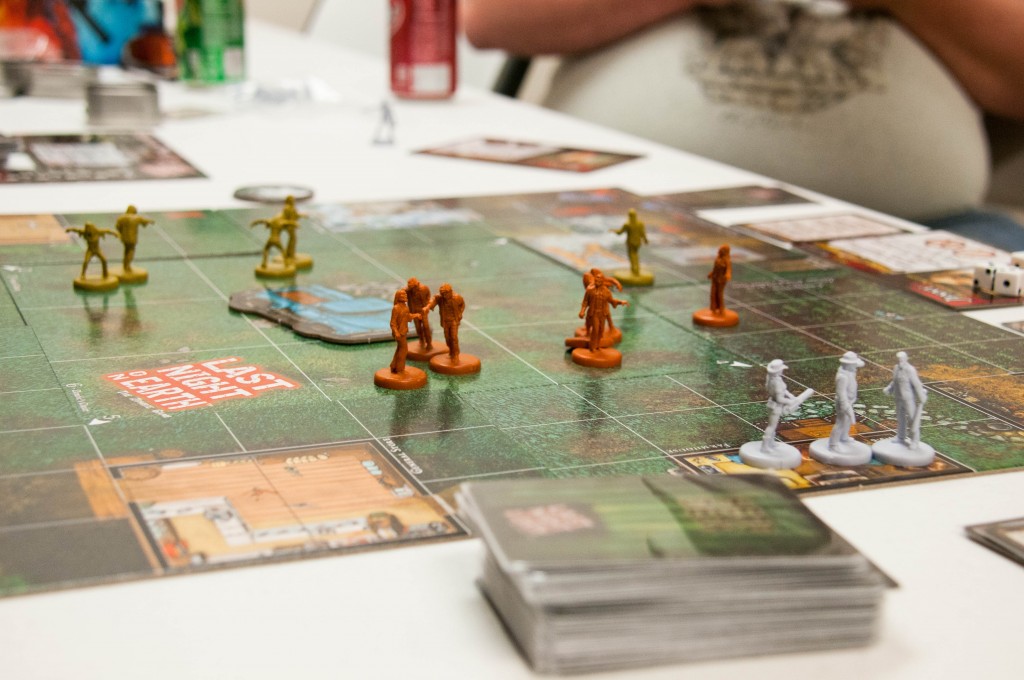 The three remaining heroes met up in one location so that they could hurriedly search the deck for the keys. As the turns progressed, the zombies accumulated, but still no keys… 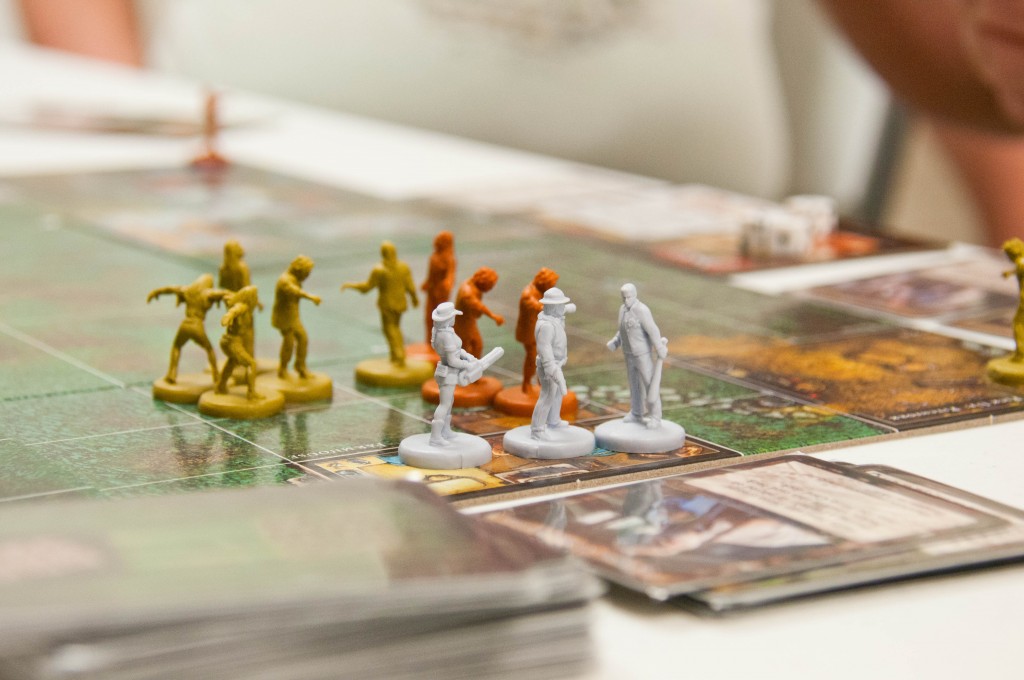 The heroes had to use dynamite on more than one occasion to incinerate entire groups of zombies at a time. There was much excitement and high-five’s to be had when Johnny rolled triple 6’s and blew up all zombies in one space! But there was even MORE excitement when Johnny found the keys!!! 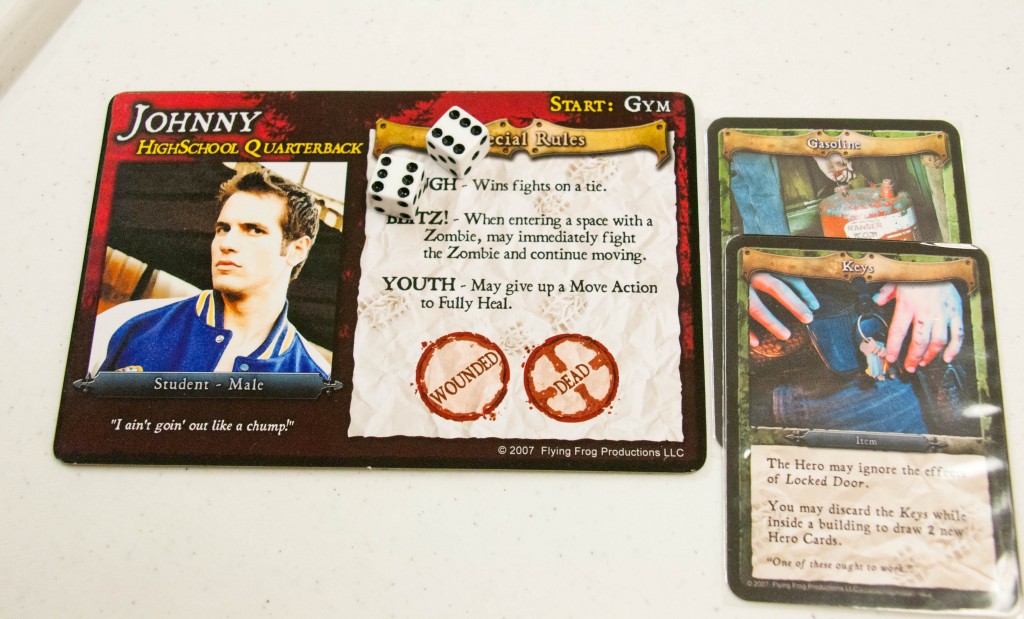 There was a mad dash for the truck. The heroes were still mending from wounds and were outnumbered. The zombies were ruthless and hot on their trail. Sam, who was controlling the red zombies, said, “Is it wrong that I enjoy being feared?” We were definitely terrified… 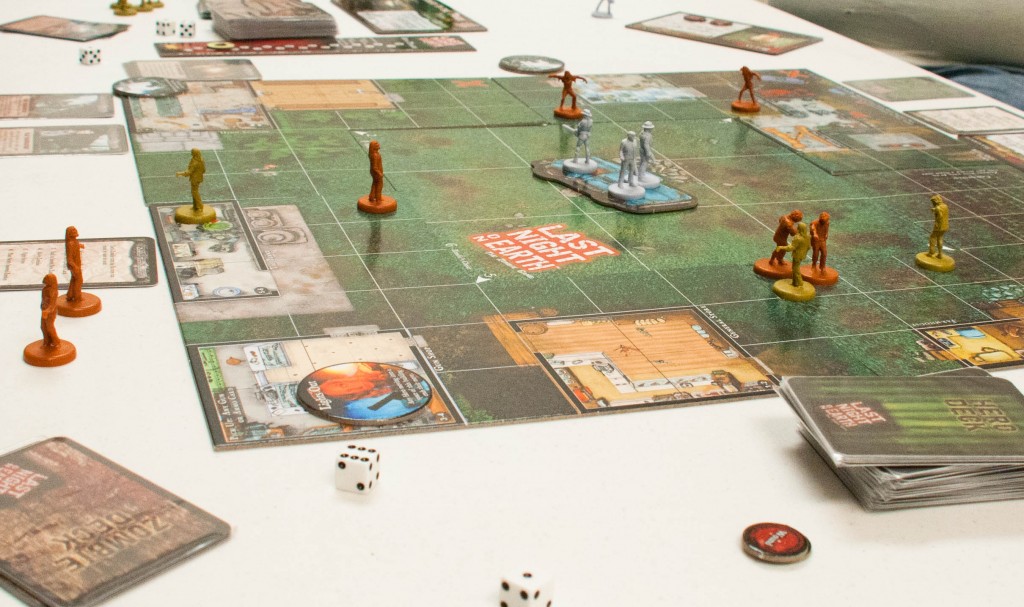 The living heroes, with strategic whisperings from Billy, from beyond the grave, made it to the truck, spent another turn filling it with gas, started it and drove the heck out of town! Close call…!!! 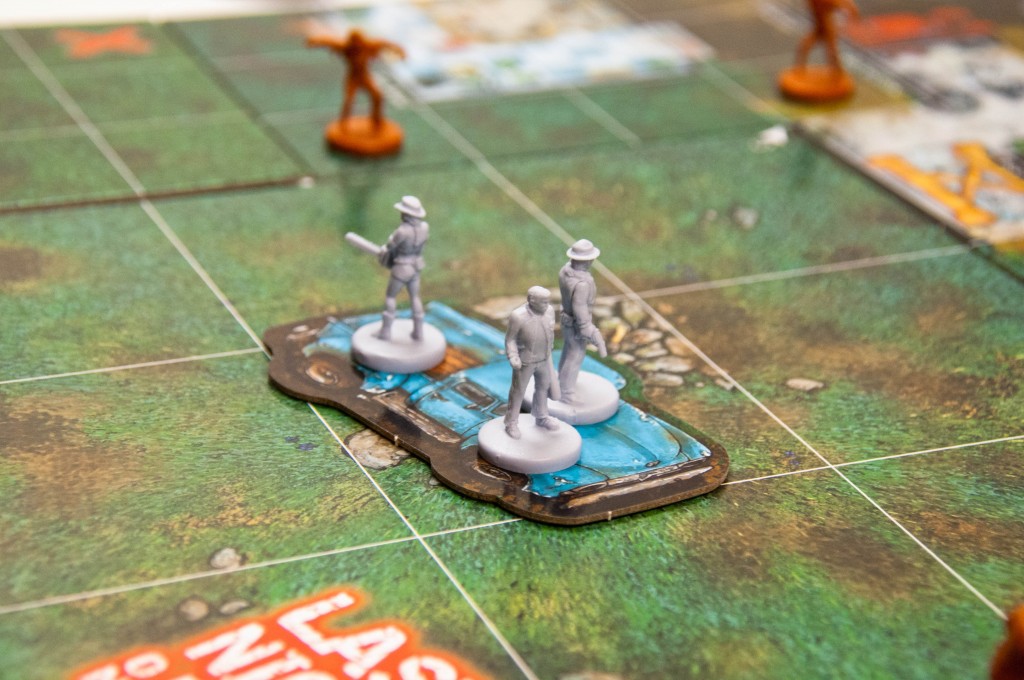 Sighs of relief and nervous laughter from the heroes could be heard amongst the grumblings of the ever-hungry zombies as the hero characters barely pulled out a second win. Whew! Congrats, Heroes! 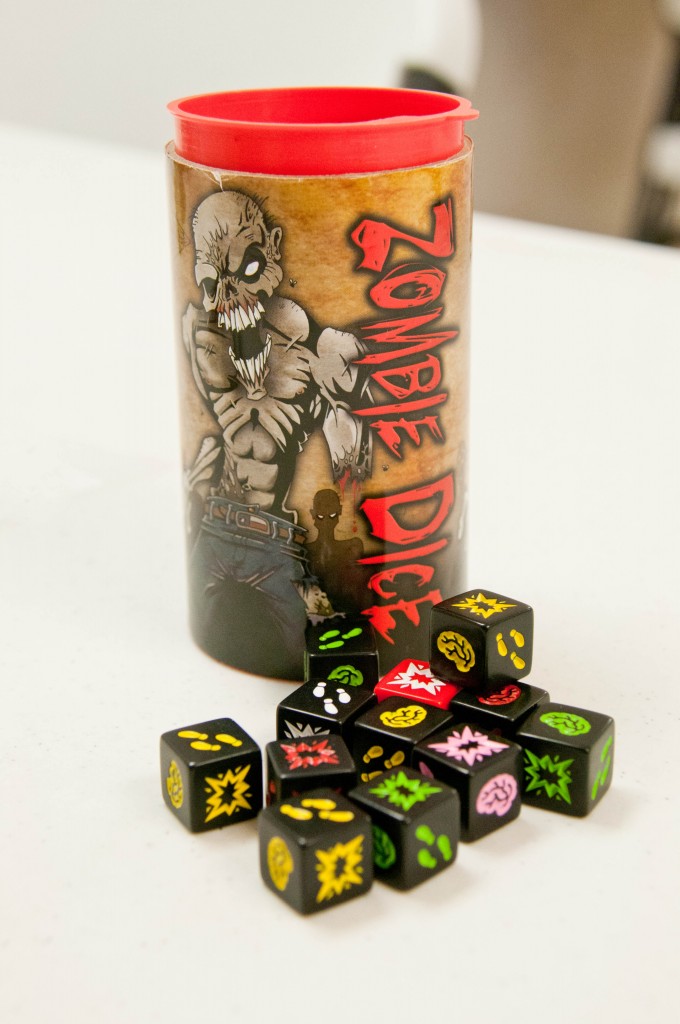 We had the games Zombie Dice and Zombie Fluxx on standby, in case anyone wanted to continue with some quicker-to-play zombie-themed games. 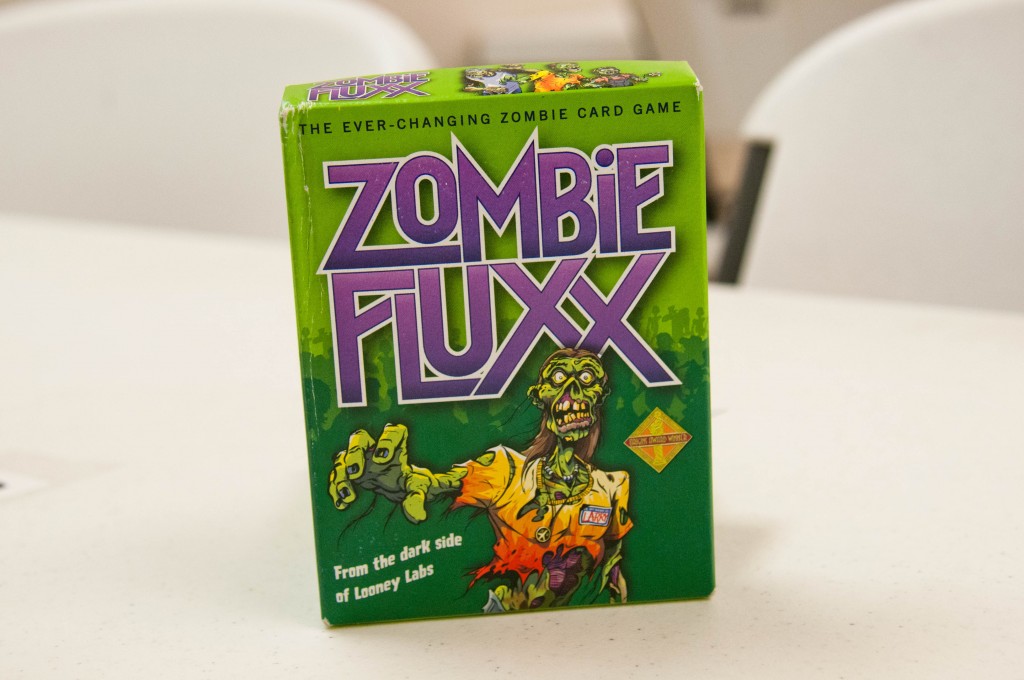 Well, “quicker-to-play” turned out to be a gross underestimation on my part. We opted for Zombie Fluxx, which ended up taking so much longer than intended that we ended up not finishing the game and closing the store down. Even though there wasn’t a winner for this round, we had lots of fun passing around creepers, especially Larry (the invincible zombie), daydreaming about possibly meeting the requirements for a coveted goal card to win the game, and inadvertently derailing everyone else’s plans in the process!